This haul is a bit different. You can play “Where’s Waldo & Magic, Inc.?” (which is to say, “Where’s the SF?”) with this one (not to mention “Where’s the Non-Anthology?”). Stray note: the six anthologies contain 579 stories (obviously with plenty of overlap in the litfic anthologies, but still… it’s a lot of stories). 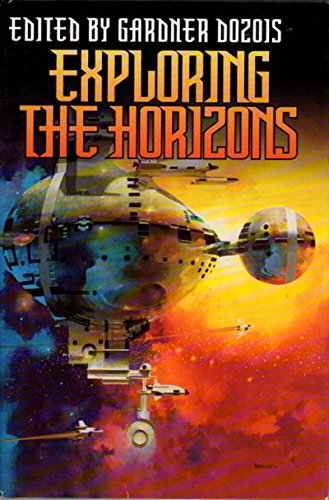 WordPress wished me a happy third anniversary today so I thought I’d review an anniversary story. My first thought was Isaac Asimov’s “Anniversary,” but that’s a sequel to “Marooned Off Vesta,” and I thought I’d just go with one story, so I decided to go with Joe Haldeman’s “Anniversary Project.” It was first published in the October 1975 Analog and, while I also have it in the Haldeman collection Infinite Dreams, I read it this time from the Dozois omnibus Exploring the Horizons (which combines Explorers and The Furthest Horizon).

One million years after the invention of the written word, Three-phasing has been created to remaster the art of reading so that he may enjoy the cache of books that has been rediscovered after being left for posterity in 2012. Meanwhile, Nine-hover has been playing around with a time machine (which no longer exists, but that certainly doesn’t end a time machine’s usefulness) and, using the books as associative talismans of a sort, she captures Bob and Sarah Graham. They’ve been recently married and were enjoying their last days of Bob’s leave before he ships off to the Korean War. You see, even in a far far far future world of amazing abilities (and telepathy) it’s hard to recapture the mentality of such primitive people and really understand what reading was like for them. By Sarah’s efforts, the future people get to experience her mind as she reads and she gets to spend more time with Bob. Then the story drives on to its smashing conclusion, fusing tragedy and comedy.

The opening of the tale is interesting and sometimes amusing but the far future, while not specifically derivative of anything, seems very familiar. However, once the 1951 characters appear on the scene, the humor and interest ratchet up several degrees. It’s the painful and hilarious conclusion that really makes the tale remarkable, though. Some might be upset by a possible perception of anticlimax, but it strikes me the other way, as a poetic crescendo which encapsulates “one of those things” in a way that touches on something deep. As I say, if this were just a “far future society” tale, it would be adequate, but the whole thing is firmly recommended.

For Featured Futures, obviously, every month is Short Story Month. Still, Charles May reminded me that this month is even more a Short Story Month than the others while taking  a look at a story for the occasion. As he says in “Wil Weitzel’s ‘Lion’–O. Henry Prize Stories—Short Story Month,” it’s “a celebration that has never really caught on with writers or readers, but one to which I feel bound to contribute.” That seems like a fair assessment and I feel much the same.

For some current approaches, a literary magazine offers “14 Writers You Love & Their Favorite Short Stories,” with links to those which are available online. I was pleased to see one short story writer I love and am extra-pleased that hers is one you can go read right this very minute to celebrate Short Story Month!: “Speech Sounds” by Octavia E. Butler. (You can also read “Bloodchild,” the title novelette of a collection of wall-to-wall excellence.)