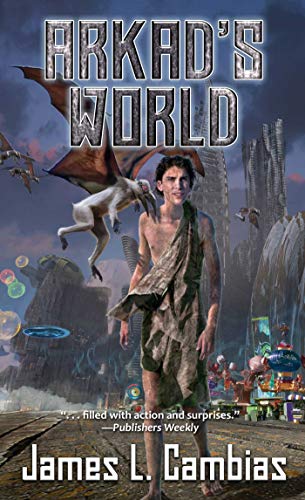 In 2211, Arkad is a homeless orphan living on the mixed-tech streets of Ayaviz on the strange, tidally locked planet of Syavusa. Ever since his mother died when he was very young, he’s been the only human in a world of multiple species. Shortly after our story opens, one of the other species mentions having seen others like him. He dashes off to search for them and eventually finds three people who are set on finding a lost starship somewhere on the planet’s surface. Arkad stretches the truth a bit by saying he knows where it is and becomes their guide in exchange for their promise to take him off-world when they leave. A picaresque journey over a good chunk of the planet follows, during which the group encounters pirates, mercenaries, and thieves, as well as a couple of varieties of Elmisthorn, a species which has conquered many worlds, including Earth. In fact, the main value of the ship is that it’s full of cultural artifacts which may help the humans resist the Elmisthorn’s efforts to modify them into compliant members of their “Family of Species.”

Along the way, Arkad learns that his companions aren’t all as human as he first thought, at least in a simple sense (and there’s something odd about Arkad, himself). Jacob Sato, a rejuvenated man of 78 with teaching and military experience, is the leader and, mostly through him, Arkad learns that Ree Bright is a woman whose modification by the Elmisthorn didn’t take and that Baichi is an amalgam of human biology and Machine technology (Machines being a powerful non-biological civilization among the many biological ones). Beyond being an attractive female to Arkad, Baichi is the closest thing to a fellow young person (being fifteen but having only been conscious for ten years after coming online as semi-mature) and both are outcasts of sorts (since Baichi is an example of a failed program of hybrids designed by the Machines to fight the Elmisthorn), so they develop a special bond.

Mostly through Arkad’s guidance, the newcomers become familiar with the Itooti, Pfifu, Vziim, AaaAa, Kchik, Psthao-psthao, and many other races who all have colorful speech patterns, physiques, modes of technology and construction, ethics, etc. Mostly through the newcomers’ guidance, Arkad learns more about the Elmisthorn and other species which mostly pass through Syavyusa rather than having a widespread permanent presence there.

Within this book, there are several references to other books such as Oliver Twist, The Wind in the Willows, and Treasure Island. This conveys both some of the specifics (as this book includes an orphan, has talking critters, and has a treasure hunt) but also conveys some of the general sensibility. A specific element of the sensibility is that those books precede the “YA” or “juvenile” markets. This, despite being a fairly long book [1] with hints of sex and some violence, is kid-friendly without being entirely adult-exclusive.

I enjoyed the first three-quarters of this book but two problems with the last quarter hurt the book overall. Neither one was necessarily fatal by itself but the first let the second hit with full force. The first relates to the fact that I’m not generally a fan of plot-less “quest” stories. Even so, I was enjoying this, but the encounter with the thieves was just one too many incidents too nearly the same as others. While the journey went over land and sea and river and desert and more, it was all just terrain and, while the crew fought pirates and mercenaries and thieves and more, it was all just fighting. The second and most serious problem is with the ending which I mostly can’t talk about but it’s not convincingly plotted and there’s a more serious issue with the characterization, which I can touch on in a general way. While the characters were mostly well-conceived, they didn’t Learn Better or change in any meaningful way [2].

There were also trivial problems and I’ll note two. The first involves the indistinct naming of the people, places, and things. For instance, on a single page, we get people named Fafof, Effa, Papfapa, Fafpip and, in a single phrase on that page, places named “Aefef, Effaf, and even Fiuf.” (And, really, none of these things, places, or people beyond the four main characters turn out to be important though some of them, including Fafof and his Pfifu companion Pfup, feature in an embedded O. Henry-like story in Chapters 10-11 which is excellent.) The second involves small-scale repetitions or contradictions or lapses such as a second description of how the Pfifu run on land as if the first had never occurred, or Arkad initially not knowing about the Elmisthorn invasion but then talking about his mother having referred to it, or having an apparent red herring about the imminent failure of Arkad’s e-reader-like device (which doesn’t even cause him to take advantage of an opportunity to transfer its contents to Baichi).

All that said, this novel does have many great strengths. As I mentioned, the characters are initially strong. The setting is vividly realized. As poorly as the aliens are named, they are richly conceived, and it’s a delight to see how different they are and how this can cause complications and strife but how they basically get along (or fail to get along) about the same with each other as they do with themselves. I particularly enjoyed the changed perceptions that Arkad and we have about one of the superficially least appealing species and even the Elmisthorn are not monolithic. Also as I mentioned, the terrain can’t carry a book by itself, but this is a variegated and strongly-depicted planet. The action scenes on it are not always tightly plotted but are generally exciting and a couple of deaths (one in action, one not; one major, one not) are effectively shocking. The novel is also generally serious but has moments of humor. In one scene, Sato wants to wait for dark to make an escape but realizes that region of Syavusa has no dark and says, “What an inconvenient planet.” And one element I was afraid I might tire of but never did was the third-person present-tense adjective-noun identifiers in the Itooti manner of speech in which “Clever so-and-so asks stupid Arkad why he does such-and-such” and “Embarrassed Arkad asks generous so-and-so to forgive his ignorance” or the like.

Postscript: I want to congratulate Baen’s proofreader (or any and all responsible parties). It was wonderful to read a book in which I noticed no proofreading errors.

[1] It’s not as long as its page count might indicate, however, due to generous font size and whitespace. Based on reading time and a very rough wordcount, I estimate this would be about 260-300 pages of an average paperback.

[2] Given the opportunity, Arkad does begin to wear more clothing and, with less need to steal, he does become a little more honest and so on, but little else changed. (Also, one thing that Arkad does (or fails to do) early on is never satisfactorily addressed and so seems retrospectively out of character or random.)