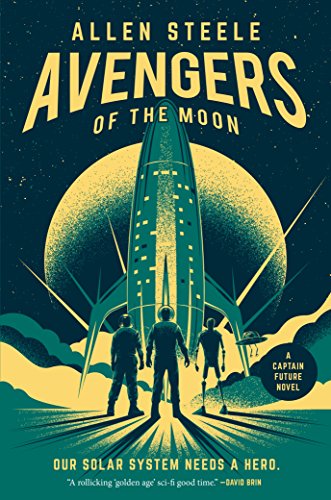 Avengers of the Moon is Allen Steele’s authorized addition to the Captain Future tales, the originals of which were a pulp series almost entirely written by Edmond Hamilton, often under the “house name” Brett Sterling, which is to say that these were mass-produced adventures for mostly young readers with no pretensions to art or scientific rigor. That said, I’ve read one of the novels (plus a novelette) and, compared to expectations, found them to be surprisingly skillfully crafted, imaginative, and entertaining works which were enjoyable in their context.

This version is “an effort to bring Captain Future into the twenty-first century for a new generation of readers.” [1] Unfortunately, as I indicated, I’m no expert on the full history of Captain Future and his Futuremen or on the nature of the changes. I can tell that the story is set in the twenty-fourth century, and the busy solar system is preserved by having Mars undergo terraforming while it and other worlds are populated with a mix of baseline humans (who must wear protective gear) and bioengineered humans. While older SF had several examples of competent women, I suspect that the degree to which Joan Randall is made a competent police officer may also be a tweak. However, certain things are unchanged or emphasized the other way: the plot is a melodramatic thriller and the villains are as black-hatted as any.

As related in the second section of the novel, twenty years before its main action, the parents of Curt Newton got involved with a businessman named Victor Corvo. They wanted to create androids and he wanted an army of slaves. When they discovered their goals weren’t compatible, the parents went into hiding along with their infant son, Curt Newton, and their aged mentor, Simon Wright, and the businessman started hunting them. Arriving at the moon, Wright died but his brain was preserved in a drone’s “body” while the android that had been intended to receive his brain developed a mind of its own and acquired the name Otho. Meanwhile, impressed by the oddly intelligent robot, Grag, they acquired it. Corvo found them and killed the parents and believed he’d wiped out their base on the moon but the three strange entities survived to raise Curt Newton. Newton’s mission in life, as designed by Wright and initially unknown to Newton, is to avenge his parents’ murders by dealing with Corvo. The story opens with Curt and Otho making a rare excursion from their hidden base where Curt first lays eyes on Corvo, who has since become a Senator of the Solar Coalition and is hosting the President, and Newton is later told his true backstory. Curt resolves to continue on his life’s journey so makes his plans and, with the help of Grag and the others, sneaks into Corvo’s compound on the moon to assassinate him. However, it turns out that there is a bigger plot afoot which leads to yet a bigger plot and then an even larger scale, without ever losing sight of Newton and Corvo. All this is complicated and modified by Newton’s meeting Joan Randall (at the same event in which he saw Corvo) and their subsequent, usually strained and awkward, interactions. Without giving anything away, there is much derring-do, lots of neat gizmos, overheard conversations, fights, a cult, and a suitably climactic climax.

The conflict, plot, and edifying message are in keeping with Captain Future and, if it’s not already obvious, this makes Captain Future somewhat resistant to being molded into something suitable for the twenty-first century and a new generation of readers if those readers aren’t going to respond to the originals anyway. The discomfort Newton incessantly has with the name “Captain Future” reads like a “signal from Fred” [2] and, I think, is an example of what has the novel fall between two stools, neither able to distance itself from the originals sufficiently to be “modern” (as Steele did in his original metafictional take in the novella “The Death of Captain Future,” which he himself calls “satirical”) nor able to embrace it fully to attain the full innocent joy it might. Also, I prefer science fiction which moves forward and am tired of “origin stories” and prequels, especially ones that are as Batman-like in backstory and as Bond-like in execution (Newton at one point even calls himself “Newton. Curt Newton”). [3] Further, the origin story slows the opening portions of the book, not just in the flashback section but in all the exposition necessary early on. Finally, the aspects of one rescue in space and of the conclusion aren’t the logically tightest. All that said, while I have to give this a mixed review, I really did enjoy it despite its difficulties. One might wonder why, in this context, Newton is the “leader,” especially as he’s not always as competent as one would like (and in at least one part with the Martian woman, N’Rala, is downright stupid) but he does win the reader’s sympathy. Joan is also attractive, the Futuremen trade some of their simple charms for more complex ones, and the tale, however familiar, grows to be fun and exciting. Basically, I’d only warn off people looking for a pure masterpiece or for whom this just doesn’t sound interesting on the face of it, or for whom any tweak to the beloved original would offend them. If you’re unfamiliar with the originals and this sounds like fun to you or you’re a fan of Captain Future who doesn’t mind some modest, mostly technological, tweaks, you will probably enjoy this. [4]

[1] This is quoted from Steele’s “Afterword” on page 297, in which he relates his first experience with Captain Future, some of his subsequent writing on the subject, and his research and approach to this book.

As far as references within the book, this is as good a place as any to mention some I recall: Obviously, Burroughs’ fiction is explicitly referenced, Leigh Brackett (the great SF writer and wife of Captain Future’s creator) is eloquently honored in a ship name, and Wells appears as the name of a city (or something like). “The Search for the Magician” may be a nod to Asimov’s “The Search for the Mule” (though it may be to any number of searches). And the section title “Fire on the Mountain,” being familiar with Steele, is likely a direct reference to the Grateful Dead.

[2] According to the Turkey City [writer’s workshop] Lexicon, edited by Lewis Shiner and Bruce Sterling, a “signal from Fred” was coined by Damon Knight and is “[a] comic form of the ‘Dischism’ in which the author’s subconscious, alarmed by the poor quality of the work, makes unwitting critical comments: ‘This doesn’t make sense.’ ‘This is really boring.’ ‘This sounds like a bad movie.'”

[3] Another thing this book reminds me of is the series of Digby Allen juvenile/YA space adventures written by Joseph Greene at the turn of the 1960s (not to be confused with the Joseph Green of the Conscience Interplanetary tales at the turn of the 1970s). The original Captain Future tales seemed to me to have a more freelance sort of mentality while equally red-haired and young Dig Allen would seem more at home in this world of prominently featured hierarchical organizations such as the Interplanetary Police Force and Solar Coalition Guard.

[4] While the book is suitable for all ages, I think any young people who aren’t on top of the world right now might especially enjoy it.

That also makes me want to digress on part of why recent attacks on science fiction, especially classic science fiction, from people, especially privileged people (usually with college degrees and who make a reasonable to an unreasonably large amount of money, usually not doing physical labor) about science fiction being of, for, and by “the privileged” make me so angry. Science fiction has always been of, for and by the misfits, which this book does a good job of illustrating. Yes, Curt is presumably white. And an orphan growing up in isolation whose parents and friends are a brain in a box, an android, and a robot, all of whom are initially treated by others as weird or repulsive or stupid. Yet they are the heroes.